The Long And Winding Road 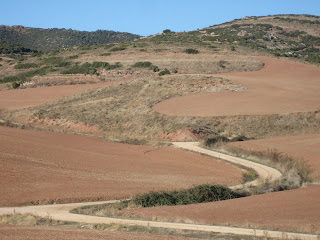 It was the walking trip of a lifetime. A momentous journey. Even more of a spiritual than a physical or mental experience. An obsession for some; a life-changing event for many; a challenging quest for all. An intensely personal yet uniquely communal striving towards the one goal: Santiago. This is my account of walking the Camino.

From Le Puy-en-Velay in south-central France to Santiago de Compostela in north-west Spain it's a distance of roughly 1560 km, nearly 1000 miles. I walked this in exactly 60 days, from 17 October to 15 December, averaging 26 km a day (which included 3 rest days).

3 recognized, historical pilgrim routes (starting in Paris, Vezelay, and Le Puy) cross half of France and converge at Saint-Jean-Pied-de-Port near the western end of the French Pyrenees. These routes are known as The Ways of Saint James, or the Chemins de Saint-Jacques. From Saint-Jean to Santiago the Way becomes the one path, the famous Camino Francés. A 4th route begins at Arles in French Provence, crosses the Pyrenees by the Col du Somport and joins the Camino at Puente la Reina.

Within the Iberian peninsula there are further paths destined for Santiago: the Camino del Norte from Irun, the Camino de Madrid, the Via de la Plata from Seville and the Camino Portugués which runs from Cape Saint Vincent via Lisbon and Oporto. There are many other routes connecting to the Camino with starting points throughout the whole of Europe.

In early October I vowed to walk the Camino. I'd known about it for ages. I had the books. More importantly I had the desire. But it was a spontaneous decision in the end. I'd arrived at a critical cross-roads in my life. I needed a spiritual reawakening. So on the afternoon of 15 October I took a coach to Lyon, France...
Posted by The Solitary Walker at 16:00

ah - that explains the quiet period
;-)

It's good to hear from you again, solitary walker.

Almost 1000 miles. 60 days. That stretches my imagination about the idea of walking and of spiritual journeys. Now I know about long it would take me to walk from where I live, near the border of Washington State and British Columbia, to my birthplace of San Francisco, California.

I look forward to hearing your stories.

Yeah, what am said.

That's what happens when you take a trip. You come home and everyone's already said everything worth saying.

Hopefully you took your camera.

I can really appreciate the spiritual element of hiking. I think it's far and away the main reason I love it so much. It's a form of walking meditation for me which really puts me and keeps me in the moment.

I will begin my walk from Le Puy on September 1st this year (2012) in part because of your tales here, but also because it is something I find that I just have to do. Thanks

I'm glad my Camino stories have inspired you, retiredeagle.