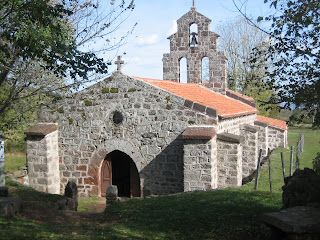 I remember that first day on the Chemin very clearly. 17 October. Blue skies. Warm and sunny. The hills and valleys of the Auvergne. Wooded slopes and the golden leaves of autumn. Peaceful, deserted villages basking in the noonday sun. Romanesque churches with rounded stone vaulting. I kept bumping into pilgrims all day. Some shared their lunch with me as we picnicked on the grass in front of the Chapelle Saint-Roch (see photo).
By late afternoon I'd reached the village of Saint-Privat-d'Allier. It's stunningly situated on a volcanic cliff above a gorge of the Allier river. A Christian family took me in free for the night. "While you are here treat this house as your home," they said.

At twilight I climbed up to the 14th century church and went inside. The silence was profound. You could hear absolutely nothing at all. Except for the slight whirring in my head of my own automatic, pointless thoughts. And with an effort of will even these were stilled. As the darkness closed in, shapes lost their solidity, and my sense of time and place became blurred. My mind emptied itself.

Later at dinner my hosts, Jean-Marc and Marie, told me how they had met on the Camino, fallen in love, married, and then decided to open their house to pilgrims. Another pilgrim arrived. Food kept appearing. The wine flowed. Their young son chased an enormous dog round and round the room. The conversation was animated and far-ranging. I couldn't understand the half of it. I realised how rusty my French had become.

Then a strange thing happened. I don't know if it was the effect of the wine after 2 nights' lack of sleep, or whether I was touched by the kindness of strangers, or whether I was charged by the many emotions I'd felt on this, my 1st day of pilgrimage. But tears welled up inside me and I wept like a child. Jean-Marc patted me on the arm reassuringly, a wise and benign expression on his face. "Don't worry. It's quite normal," he said. "We experience this time and time again. It's necessary..."

That night I rolled out my sleeping bag in their attic-dormitory and slept long and deeply for the first time since leaving home.
Posted by The Solitary Walker at 09:08

"Don't worry. It's quite normal," he said. "We experience this time and time again. It's necessary..."

When I have cried unexpectedly in that way, I have been overwhelmed by the shared experience of true hospitality. Someone was just saying to me that hospitality depends equally on a giver who gives freely and a receiver who accepts freely.

Yes, to give to a stranger, to extend true hospitality, without expectation of anything in return, is a wonderful thing. I had other experiences like this along the Way. The tears - totally unexpected, completely involuntary - I found were a blessing to me.

How did it happen that you were taken in by this family. Did you just bump into them in the village or was it pre-arranged?

Neither. I walked into the village and there was a little sign on a gate saying 'Pilgrims welcome' or something like that. I knocked on their door. They welcomed me in. I asked how much to stay the night. They replied: it is free - but you may give a small donation if you like, but only if you can afford it. You find Catholic families, and not only Catholic ones, like this from time to time along the Camino. It is pure hospitality, and a wonderful, sacred thing. (Check out Rebekah Scott's blog - which I link to in my sidebar.)

I am glad to read about your tears. There were a few days I cried many tears, cleansing tears. I was quite pleased the Le Puy route was not too crowded and I could cry my tears in privacy! But a few weeks later when I met someone else crying tears she could not control, I was able to tell her it was quite normal...

Not sure why today I kept your blog open in a window in my laptop and while cooking a meal for dinner and in an attempt for my screen don´t log off, I touched the pad and your Camino´s posts opened... first the 5th Camino and then the 1st one, and I read a few things that moved my feelings enormously...
Certainly it has to do that this Saturday, it will be one year I left home for my walking in Spain and I have been thinking what has that mean... where my life has come, which my path is right now and especially how I have changed since I set out in my pilgrimage... now: I am a pilgrim.

When I arrived to Madrid last year, and I was waiting for the train in Chamartin, I spent a few minutes in the cyber and posted the following in my blog:

"In the end, we always arrive at the place where we are expected."
Book of Itineraries
(from "The Elephant´s Journey" by José Saramago)
I have just realized that."
http://www.lonaciente.blogspot.com.ar/2011_09_01_archive.html

Today, reading your post where you describe how you cried in your second day pilgriming, I can feel what you felt. I set out in my pilgrimage cause I needed to trust again, to feel there were people out there committed with the other, with the world and themselves, and I can remember when I said good bye to a fellow pilgrim in Santiago before leaving for my flight back home: "I hope you found where you came here looking for, as I did"... and I cried once again... as in the ocassion I was told "Don´t worry, it´s normal and necessary"...

Amazing how things relate... amazing how true it is that "In the end, we always arrive at the place where we are expected."

My blog is www.lonaciente.blogspot.com I post mostly in Spanish and I have made some "free" translations into English. I post about my journey/life and although public, it´s a very sacred place.
Cris M