The Pilgrim, The Walker And The Tourist 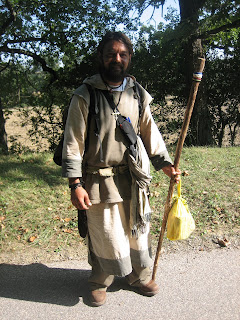 A visitor passes through a place; the place passes through the pilgrim. CYNTHIA OZICK
Cynthia Ozick is right. Pilgrims are not tourists. They are not principally long-distance walkers either. Many pilgrims are keen walkers; but many, too, are ordinary people who have never done a long-distance walk in their lives, and probably never will again (though some will return year after year).
For the Saint James pilgrim the tangible, ostensible goal of the journey is Santiago de Compostela itself, to be sure. But even more important is the gradual realisation that the truest spiritual fulfilment lies in the pilgrimage itself, each and every day of it - each day with its own unique texture and flavour, its own weather and climate, its own hardships, its own highs and lows, its own route-finding problems, its own little joys and pleasures, its own micro-friendships.
A pilgrim may visit many ancient, numinous sites and shrines along the Way, but he or she absorbs the atmosphere and moves on. There is indeed a sense that the place passes through the pilgrim, certainly affecting, perhaps changing or transforming him or her in some subtle or even in some more striking and sudden manner. The pilgrim does not have a checklist of places to visit like a tourist on the tourist trail. He or she may arrive in a town or village too late to see much at all, and will only be interested in finding a bed for the night, and something to eat. And may leave early the next morning in the dark.
The photo is of Pilgrim Alex whom I met somewhere along the Canal du Midi in southern France. He had walked from Seville to Santiago, from Santiago to the Pyrenees, from the Pyrenees to Toulouse. From there he was making his way to Rome. And after Rome he would head for Jerusalem. He was sleeping rough as he could not afford to pay for accommodation.
Posted by The Solitary Walker at 09:47

Lovely to get you drifting in and out of your blog solitary walker - hope your journey has been fulfilling. I send my love.

Fulfilling - and bloody hard on the feet!