Getting High At Last

Another short tram-and-bus ride brought me through Montpellier's western suburbs to Grabels. From the river I climbed steeply up through pinewoods to an open limestone plateau. I followed a line of electricity pylons across a landscape of low, scrubby, grey-green plants (cistus, sage, thyme, juniper and stunted oaks). This was the garrigue - a landscape typical of the French Mediterranean, where heat-tolerant, lime-loving plants scrape an existence on ground long eroded by deforestation and grazing sheep.
After losing the path for a while (I often did this - the Chemin d'Arles isn't as well marked as the Le Puy route) I followed the road to Montarnaud where I spent the night. I was lucky to find any accommodation there at all. I'd almost given up when I met up again with Reiner, the German pilgrim. He kindly invited me to share a room he had found chez M. et Mme. Gallière.


The next day the Way led via Aniane (I had a picnic lunch on the church steps) to The Devil's Bridge (Le Pont du Diable), a popular tourist spot, then followed a main road road along a river gorge to the historic and most attractive village of Saint-Guilhem-le-Désert. Saint-Guilhem was planned by Guilhem, grandson of Charles Martel (who halted the Moorish expansion into Europe at the Battle of Poitiers - also known as the Battle of Tours - in 732, and who also founded the Carolingian Empire) and cousin to Charlemagne (747-814), King of the Franks and the first Holy Roman Emperor. This photo was taken from the centre of the square: 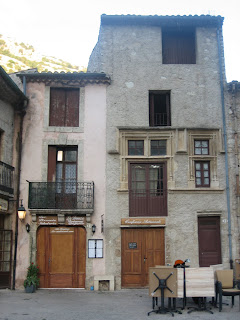 And these are the cloisters of the abbey church... In the early evening, after the day-trippers had reboarded their coaches, it was a very peaceful and special place indeed: 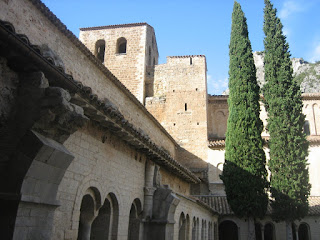 Saint-Guilhem lies spectacularly placed at the head of a bowl-shaped valley or cirque at the foot of Haut-Languedoc's high limestone massif. This vast limestone plateau, intersected with gorges and ravines scored deep into the rock, is also known as the causse. In the morning I climbed in zig-zag fashion one wall of the cirque to the heights above, and stayed high for at least 15 km. The views were certainly not disappointing: 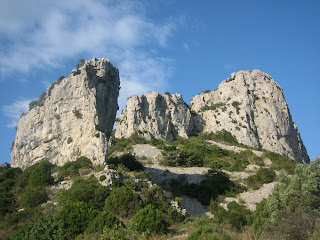 What a wonderful day's walking. I wish I were back there now. Not a soul to be seen - except Francis from Barcelona, my pilgrim companion for the day, and the occasional cyclist. Here's another typical vista: 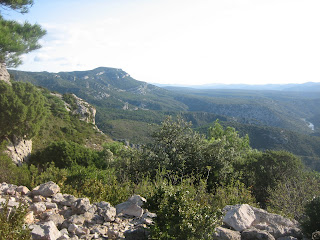 That evening, in Saint-Jean-de-la Blaquière, the gîte was full, but the owners of Le Snack-Bar put me up, and charged me not a euro. And in Le Snack-Bar a pleasant evening was had by all - though I only ordered tripe sausage (andouillette) because I did not realise it was tripe sausage. And I only ate it because I was I was VERY hungry. The photo shows from left to right: Susan and Ralph from the US, Francis from Spain and Reiner from Germany. 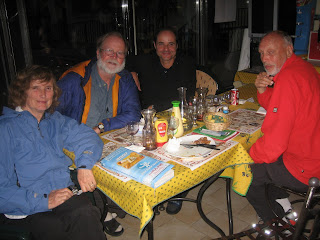 Posted by The Solitary Walker at 12:36