The Lord Of Song 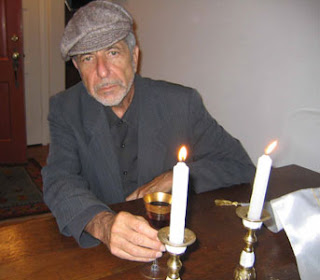 With all media attention focused on Hallelujah at the moment, I thought it might be interesting to hear what Leonard Cohen himself said about this song:
On his approach to composing:
There are two schools of songwriting. The quick and me.
On the writing of Hallelujah:
The only advice I have for young songwriters is that if you stick with a song long enough, it will yield. But long enough is not any fixed duration, it’s not a week or two, it’s not a month or two, it’s not necessarily even a year or two. If a song is to yield you might have to stay with it for years and years. 'Hallelujah' was at least five years. I have about 80 verses. I just took verses out of the many that established some sort of coherence. The trouble that I find is that I have to finish the verse before I can discard it. So that lengthens the process considerably. I filled two notebooks with the song, and I remember being on the floor of the Royalton Hotel, on the carpet in my underwear, banging my head on the floor and saying 'I can't finish this song.'
On why Hallelujah took so many years to write:
They all take quite a long time. And it’s no guarantee of their excellence. I have a lot of second rate songs that have taken even longer.
On Hallelujah's elastic rhymes:
They are really false rhymes but they are close enough that the ear is not violated. In English, we love to hear these coincidences that we call rhymes. It does delight us for some odd reason, we are delighted by inventive uses of sonic coincidences.
On Hallelujah's universal appeal:
I don't know. It has a good chorus. We basically all lead the same kind of lives, and the more authentically a song touches on those areas, which are gain and loss, surrender and victory, popular music has to be about those subjects.
On the meaning of Hallelujah:
Finally there's no conflict between things, finally everything is reconciled - but not where we live. This world is full of conflicts and full of things that cannot be reconciled, but there are moments when we can transcend the dualistic system and reconcile and embrace the whole mess and that's what I mean by 'Hallelujah'. That regardless of what the impossibility of the situation is, there is a moment when you open your mouth and you throw open your arms and you embrace the thing and you just say 'Hallelujah! Blessed is the name.' And you can't reconcile it in any other way except in that position of total surrender, total affirmation.
That's what it's all about. It says that you're not going to be able to work this thing out. This realm does not admit to revolution. There's no solution to this mess. The only moment that you can live here comfortably in these absolutely irreconcilable conflicts is in this moment when you embrace it all and you say 'Look, I don't understand a fucking thing at all - Hallelujah!' That's the only moment that we live here fully as human beings.
Posted by The Solitary Walker at 13:46

An interesting mix of comments. 'It has a good chorus'...the simplest observation and yet the truest!

Fascinating comments. So much packed into such a small space!

". . . but there are moments when we can transcend the dualistic system and reconcile and embrace the whole mess and that's what I mean by 'Hallelujah'."

First hearing Jeff Buckley sing "Hallelujah" in 1997 during a time when I was experiencing unrelenting grief.

Tears of astonishment, followed by tears of laughter, hearing it again while watching "Shrek" at the urging of RTN who was under treatment for lung cancer at the time.

Cohen's interview with Terri Gross on Fresh Air two new years'days past was a classic. There would be a long-ish pause after most questions as you could tell he tried to make sense of what she was asking. He was coming from a completely different place in his responses to her questions -- yet not condescending or irritated with the one-dimensional quality of her questions. It was a very illuminating interview in so many ways. I've listened to it several times over. Fr.example, she asks him "Why did you become a Buddhist?"
[long pause] "Well, I never became a Buddhist, I have a perfectly good religion, I'm Jewish. I had a relationship with my teacher, and studied with him. If he'd been a nuclear physicist, I'd have studied nuclear physics."

Thanks everyone for these comments.

I must visit your excellent blogsites more often, Beth - they are so interesting.