The Golden Treasury Of Poetry 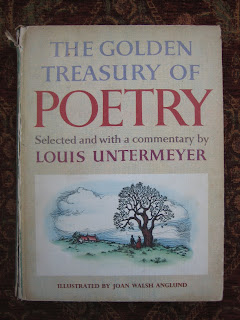 One Christmas when I was very young I was delighted to find a big, hardback book of poems in my Christmas stocking. The book was called The Golden Treasury Of Poetry, selected and with a commentary by Louis Untermeyer, and illustrated by Joan Walsh Anglund. My photos show the front cover and 2 of its double page spreads. This volume has always enjoyed a special, treasured place on my bookshelves. For it was this book above all which kindled in me a lifelong passion for books and literature, and for poetry in particular. 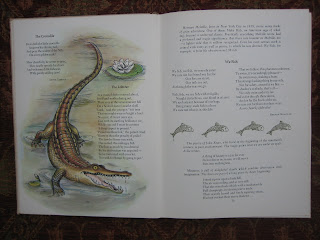 The poems were arranged in 12 themed sections which had titles such as Creatures Of Every Kind, Unforgettable Stories, Good Things In Small Packages and Around The Year. Untermeyer's selection of poems was brilliantly done - sure, there were some well known favourites by people like Edward Lear and Lewis Carroll (and why not), but there were also narrative poems about American history such as The Little Black-Eyed Rebel by Will Carleton and Grandmother's Story Of Bunker Hill Battle by Oliver Wendell Holmes which were really quite challenging and slightly obscure for a young non-American reader. 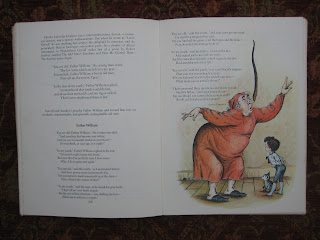 One of the poems I used to turn to again and again was this touching and sweet poem by Ogden Nash, who unbelievably just about manages to avoid the whimsical in his An Introduction To Dogs:
The dog is man's best friend.
He has a tail on one end.
Up in front he has teeth.
And four legs underneath.

Dogs like to bark.
They like it best after dark.
They not only frighten prowlers away
But also hold the sandman at bay.

A dog that is indoors
To be let out implores.
You let him out and what then?
He wants back in again.

Dogs display reluctance and wrath
If you try to give them a bath.
They bury bones in hideaways
And half the time they trot sideaways.

Dogs in the country have fun.
They run and run and run.
But in the city this species
Is dragged around on leashes.

Dogs are upright as a steeple
And much more loyal than people.
Posted by The Solitary Walker at 10:19

A lovely memory and a delightful Nash poem.

Many of us, I imagine, have a similar account of that special book, the one which reached into our heart and captured something, that stirred our imagination, that provided escape and a vast, adventurous world beyond.

You were obviously given a life-long gift.

I have my father's copy of Palgrave's Golden Treasury - it is a good reference work and I use it all the time. I think my favourite poem in it is Keats's "On a Favourite Cat drowned in a tub of goldfishes."
Love Ogden Nash - like the poem. The quote about dogs that I like (being the owner of a dog) is that whatever you do dogs are always on the wrong side of the door.
My favourite Ogeden Nash rhyme is:

Clad your lower limbs in pants.
Yours are the limbs my sweeting.
You look divine when you advance,
but have you seen yourself retreating?

Love this poem - I like 'And half the time they trot sideaways.'

This is so true; Dobermanns do it elegantly like ballet dancers, and boxers kind of lollop along at 45 degrees looking slightly unhinged!

I believe so fervently in the immeasurable influence of that which we read at an early age. My thanks go to my parents and their friends who always kept my book-pile topped up!

This is a first-time visit for me via The Weaver of Grass. I am determined to do more detailed walks this years so have had fun reading up on all your walks, particularly the Pyrenees - a place I love.Thank you for introducing me to Herman Hesse's The Wandering- I shall try to chase it up.Also, as an Aussie, I'm pleased to see that Patrick White is there with your favourite authors. So good to meet you and I will certainly come back.

What you say is so true, Raph - the influence of those early books is incalculable.

Thanks for visting, Pam! Your mentioning the Pyrenees just makes me want to go there again.Right now!

Patrick White, I truly believe, although I haven't read all of his novels by any means, and although he's sadly not particularly 'fashionable' at the moment (you'd be hard pressed to find a good selection of his books in UK bookshops) - is an astoundingly brilliant, world-class author, IMHO.

Oh, I had several of those very special books, and it's probably no coincidence that they were all hardbacks and beautifully illustrated.

A beautiful book is something to treasure, for sure. And I believe it does help to instill a love of reading in a child.

Hi SW, I enjoyed learning how much Ogden Nash's Dogs meant to you. I've linked to you from my blog about how dogs were a favorite topic for Ogden Nash . Cheers,

Hi. I was given a copy of this book for my 11th birthday in 1962. I still have it and totally treasure it often reading parts of it. Also the Golden Story Book with tales in by Swift, Lear, Tennyson, Keats, Bunyan, Irving, Carroll, Kingsley, Longfellow, Ballantye, Stevenson and Thompson. JJones - Gundagai

I had this wonderful book as a child too. What I loved was that the poems weren't just kids' poems or limericks (though there were many of those and they were delightful). But there were also many dramatic and epic poems from Shakespeare and Longfellow. Thanks for keeping the book alive in memory.

Thank you for posting this, this resonates I love this book. I was looking to know the Christiana Rosetti poems in there ... There was one in particular I was trying to remember a couple of days ago.