My heart soared when I read Rachel Cusk's eulogy to DH Lawrence in yesterday's Guardian Review. Can  a writer ever have been more reviled, misrepresented and misunderstood? I clearly remember having heated arguments about him with ardent German feminist teachers in the early 1970s (I was a student teacher in Frankfurt at the time). They seemed convinced Lawrence was a filthy-minded male chauvinist pig. Never in history could a particular literary view have been further from the truth. His writing is nearer to the sacred than the smutty. He's male, certainly, but in The Rainbow and Women In Love - his two greatest novels - he reveals himself not as a chauvinist but actually as a proto-feminist. 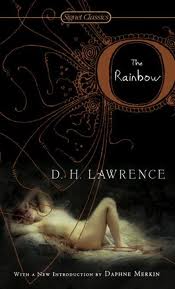 Long-standing readers of this blog will know how highly I rate Lawrence in my own personal pantheon of artists. Lawrence was a ground-breaking, revolutionary writer in his subject matter, in the way he wrote and in the language which he used. And in The Rainbow he documented the end of the Victorian era and the birth of the modern age in a manner so brilliantly original that no one else, in my opinion, came close to rivalling it.
One of the things I love most about his style is how he juxtaposes the spiritual and the earthy, and marries a kind of ecstatic, Biblical, mystical language with a more modern tone of rawness, exactness, almost brusqueness. He rejects those emblematic, 'universal' characters we encounter so often in Victorian fiction, and champions a more rounded and rough-edged individuality. He rescues the sensual body from its rigidly intellectual Victorian straitjacket and sets it free. He sees the future of women as one of liberation from drudgery, domestication and male domination, and envisions for them a new world of education, meaningful work and independence of thought. Much of his fiction explores this excitingly fresh emotional relationship between men and emancipated women. Though, at the same time, his view about the modern era is complex - for he's also pessimistic about growing industrialisation and our subsequent alienation from nature and agrarian life.
Cusk quotes this passage from the opening pages of The Rainbow. I think it captures well the lyrical muscularity and provocative intensity of Lawrence's writing: They felt the rush of the sap in spring, they knew the wave which cannot halt, but every year throws forward the seed to begetting, and, falling back, leaves the young-born on the earth. They knew the intercourse between heaven and earth, sunshine drawn into the breast and bowels, the rain sucked up in the daytime, nakedness that comes under the wind in autumn, showing the birds' nests no longer worth hiding. Their life and inter-relations were such; feeling the pulse and body of the soil, that opened to their furrow for the grain, and became smooth and supple after their ploughing, and clung to their feet with a weight that pulled like desire, lying hard and unresponsive when the crops were shorn away. The young corn waved and was silken, and the lustre slid along the limbs of the men who saw it. Anyone else detect stylistic echoes of the King James Bible here?

It's a term to be used sparingly, but I would have no hesitation in calling Lawrence a 'genius'. One of the things I find most remarkable and inspiring about him is how he achieved artistic greatness from such humble origins: his father was a miner and he was brought up in an ordinary Nottinghamshire mining town. (Pretty much all the leading literary figures of his day - many of whom he later got to know - were from highly educated, upper-middle-class backgrounds.) And instead of disguising or rejecting his working class roots (though it must be said his mother had been a schoolmistress, and was far more educated than his barely literate father), he celebrated them through the vitality and imaginative power of his writing.

Rachel Cusk ends her article like this: But Lawrence possessed the bitter knowledge born of his own experience: that originality and truth will always meet with rejection by the common mind. It was to the individual that he addressed himself, for it is as individuals that we recognise truth, and as individuals that we read. This is why Lawrence was a writer; and why reading him remains a subversive, transformative, life-altering act.

(A two-part adaptation of The Rainbow and Women In Love will be broadcast on BBC4 on Thursday 24 and 31 March.)
Posted by The Solitary Walker at 22:42

"Lady Chatterley's Lover" is probably one of the most life-affirming novels I've read, in that he embraced earthy sensuality in a sacred light. It is a book that I will never part with. I have yet to read "The Rainbow" and "Women in Love" and it sounds like I need too. "Sons and Lovers" is on my bookshelf, perhaps I should read that next!

Oh, wow! I do envy you - reading 'Sons and Lovers' for the first time! The book is amazing. And then go on to 'The Rainbow' and 'Women In Love'. What treats you have in store, Grace! I agree so much about 'Lady Chatterley' being incredibly 'life-affirming'. That's what I love about it. And about all of Lawrence's work.

I read Lady Chatterly's Lover long ago, and that's all, except for a few of his poems, which I hold in high esteem. I really appreciate your attention to him here, and everything you wrote and quoted, because I will embrace your recommendation out of an echoing response in myself.

So in that order then, that you gave Grace? Sons and Lovers, The Rainbow, then Women in Love?

Yes, yes and yes! Oh my, what a sensuous and intellectual feast! I'm looking forward to your reactions.

Anybody who has worked the land must feel the power of that excerpt from the opening chapter of "The Rainbow".
...Tramp

That's so true, Tramp. The Brangwen family had been working the land for generations. Coming from a rural background myself, and a farming/milling family, I can identify strongly.

Enthralled by this generous post, I too now intend to read in the order you have recomended DH Lawrence, Warm Regards.

I'm so glad I inspired you also to read DHL, Alive. Best wishes.

I've just come across your blog,I very much agree that ideas flow when walking.Yesterday I bought a copy of The Rainbow,intending to reread it before I see it on film.
An interesting post......I look forward to reading more.
Best wishes!

Thanks Forest Dream Weaver. Don't expect too much from the film: I've seen a clip and it doesn't look up to much! Will call on your own blog soonest.