Real Love Is A Pilgrimage 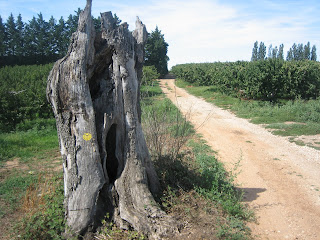 The road goes on for ever... Notice the little yellow coquille marker (the scallop shell is a symbol of Saint-Jacques and the Camino) on the dead tree. 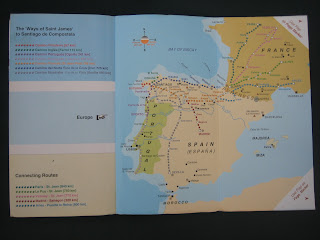 This is a simple map showing the main Ways Of Saint James (from John Brierley's A Pilgrim's Guide To The Camino De Santiago).

Real love is a pilgrimage. It happens when there is no strategy, but it is very rare because most people are strategists. ANITA BROOKNER
Last year I walked the pilgrim route from Le Puy in south-west France to Santiago de Compostela in north-west Spain - a journey of 1500 km which lasted exactly 60 days from mid-October to mid-December.
But the Camino had not finished with me. It had gripped me. It had got under my skin. It called me again this year. It drew me back. Be warned, Camino lovers, it does not let you go.
This is an account of my 2nd Camino - this time from Arles in the French Camargue to Puente La Reina on the Camino Francés in northern Spain (combining the Via Tolosana or the Voie d'Arles with the Via Aragonés), a journey on foot of between 800 and 900 km (depending on which statistics you believe). I calculated it was about 870 km. This I walked in 46 days at an average of 19 km a day - slower than my 1st Camino. I didn't want to rush. I wanted to stop from time to time to reflect on things and look around. Also I had some foot problems so I took more rest days.
As usual I had no real strategy. My preparations were fast and minimal. I would see in the due course of time what might unfold, what the Camino might reveal...
Posted by The Solitary Walker at 17:11

I am really looking forward to this. All the best to you,
Alan

Fantastic. So that's where you've been. Hope walking the razor's edge brought you to beauty.

Please can you lead me to the link for your Arles camino? I tried to find it but I wandered all around your blog. I'll be walking from Lourdes in June and would love to read about your experiences.
un abrazo,
amawalker

Click on "My 2nd pilgrimage (Arles) starts here" in the CAMINO widget on the R. hand side of my blog. It will lead you to the first post which is called "Real Love Is A Pilgrimage". Then all you do is simply click on "Newer Post" at the foot of each post for each consecutive entry about the journey.

You will love the Arles path. I thought it wonderful and enjoyed every minute. Accommodation fine without booking ahead when I went in Sept & Oct - but you may be wise to do so a bit in summer as there are fewer gîtes than on the Le Puy route, and they usually have fewer beds.

If you want any advice or info about anything at all, please just ask.

I envy you your walk. I would do it all over again tomorrow if I could.

hello! i have done the camino from st jean to santiago in 2007 and i am currently debating between Arles and Le Put for my 2nd camoino this April. I am mostly concerned about the weather, since I dont have heavy duty rain gear or snow boots. Also, I am wondering about price differences of the two camonios and their popularity. Any info or tips you have would be greatly appreciated.
Many thanks, Carmella

Carmella, both the Arles and the Le Puy routes are lovely - I would have difficulty in recommending one above the other, but I think I would go for Le Puy - and in April/May the temperatures are warming up. I would say a great time of year to go. Of course you will need to take some light but effective rain and cold weather gear - but I wouldn't have thought heavy-duty.

You didn't say if you were continuing over the Pyrenees - the Col du Somport and the Route Napoleon should be OK - but you never can tell. Pyrenees weather is notoriously fickle. You won't need snow boots before then however!

Have a great time...