Hadrian's Wall Country has always been a popular destination for the masochistic and the frankly mad. BBC WEBSITE The Guide to Life, the Universe and Everything 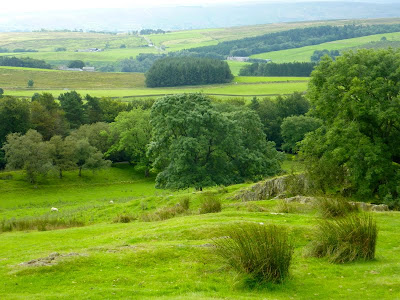 New York, New York (So Good They Named It Twice) GERARD KENNY
Once Brewed, Once Brewed (So Good They Named It Twice) THE SOLITARY WALKER
Once Brewed/Twice Brewed is a tiny settlement exactly halfway between Newcastle and Carlisle on the Hadrian's Wall Path. We spent the Tuesday night there. It has a pub. It has a youth hostel. It has a light scattering of isolated farms and cottage B&Bs. And that's about it. But what's with the name? Is it Once Brewed or Twice Brewed? I'll tell you a little story.
In the mid-eighteenth century a certain General Wade submitted a design for a military road which would run east to west just below Hadrian's Wall. Unfortunately he died before planning permission could be granted (evidently it took ages to obtain in those days as well) - but his engineer carried the project through, using stones from the Wall as a foundation for the new road (ah, so that's where much of the Wall went). The navvies building this road naturally demanded good, strong ale from the local pub at the end of their working day, but the pub beer was watery and weak, so they insisted the crafty, cost-cutting landlord brew the beer again. Hence the pub's present name: the Twice Brewed Inn.
Two hundred yards east of the inn lies the youth hostel - which in fact was England's first youth hostel ever. It was officially opened in 1934 by Lady Trevelyan of nearby Wallington Hall. A staunch teetotaller, she announced in her ceremonial speech: Of course there will be no alcohol served on these premises, so I hope the tea and coffee will only be brewed once. Thereafter the hostel became known as the Once Brewed Youth Hostel. And that's the reason why this smallest of hamlets has two names.
Anyway, George and I dined at the Twice Brewed Inn and found the beer very good indeed, as was the company, for the bar and eating area were awash with lively, talkative Hadrian's Wall trampers. Seating was scarce so we politely gatecrashed one occupied table, requisitioned two stools, and struck up a conversation with two friendly walkers who - let's put it like this - now know plenty more about blogging than they did before (and nihilism and owls and American politics and stampeding cattle etc.).
The next day we were heading further west when who should we bump into but poet, short story writer, walker, climber, fell runner, amateur radio enthusiast, music teacher, double bass player and gypsy swinger Dominic of the blog ...made out of words. He also happens to be my wife's cousin. We'd arranged to see him in Gilsland later that day, but Dominic, eager to join up, had arrived early and had walked from Gilsland to meet us. He was equally surprised to see me as, of course, I'd also met up with George sooner than originally intended. This American trekker does seem to possess some magnetic power! Dominic proved to be one of the most interesting and stimulating of companions. You'd probably call him a lateral thinker. He tends to fire off all sorts of thoughts and ideas at crazy angles, often leaving George and I trailing in his creative wake.
Eventually we came to Thirlwall Castle - more a fortified house than a castle, and built entirely of masonry plundered from the Wall (ah, so that's where much of the Wall went)... 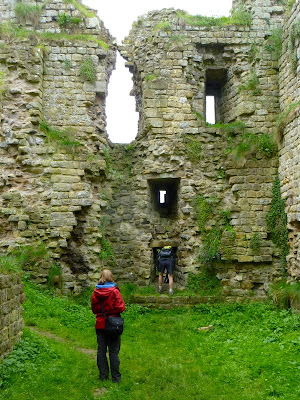 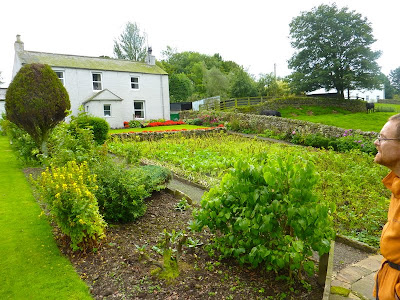 And here are George and Dominic striding purposefully onwards... 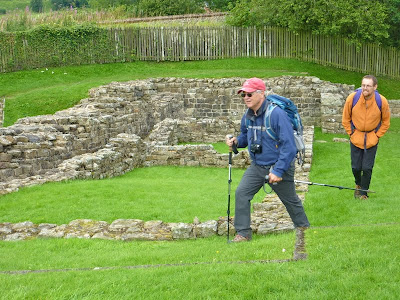 Posted by The Solitary Walker at 06:34

It sounds like you have a couple of good travelling companions. It is nice to go solo but sometimes nicer to share the sights and stumbling stones along the way with like minded companions.

The Romans obviously were pretty good stonemasons since many have valued and plundered the stones.

I quite envied whoever it was had the Hadrian's Wall path running through their garden.

Re Once/Twice Brewed: there are many strange place-names in that part of England: Pity Me springs to mind, near Newcastle. My favourite wall-name (not that far from the Wall) is Wallish Walls. What else does one expect walls to be like?

Your comments on Dominic's 'diversity of language and topics' is very accurate. I should know as I have know him intimately for the last fifty three years!

Thanks for your comment, Arija. Yes, it's only in comparatively recent times that the Wall has been consciously preserved. If you look carefully enough, you can find the distinctive square-cut stones of the Wall also turn up in nearby farmers' boundary walls and buildings.

Dominic, did you know there actually is a New York in England? Don't hold me to it, but I think it may be a village in the Lincolnshire Fens. It's so funny when you see the signpost to it - stuck in the middle of nowhere.

Great post, Robert! So glad you told the entertaining story of Twice Brewed, Once Brewed, and our great dinner at the Twice Brewed Inn. I was surprised to learn that the youth hostel in Twice Brewed was the first ever in England.

Your profile of Dominic is spot-on! A multifaceted guy, indeed, and to his credit, totally unpredictable. I'm ready to join you two guys on another walking adventure — anytime, anywhere.

I can't help smiling and even letting out a giggle here as you describe these stories of origins and also the great times you three had. Oh that meal at the Twice Brewed sounds like heaven.

This is all so marvelous, and I also wonder if like the legendary fish caught by the story-telling fisherman, the stories will loom larger and larger in years and decades hence, as the best (and worst) experiences tend to do!

Love the idea of you all walking together again...with the provision we all get to peek over your shoulders via blogs!! Thanks for this entertaining entry!

Thanks, George, my friend! I think it would have been legendary rather than merely great had I ordered the cream for your pudding rather than the custard... ;-)

Ruth, the sound of your giggles is echoing round my study as I write this, and it's a rather sweet sound, verging on the uncontrollable, but reined in at the last moment, and with a hint of poignancy...

And Karin - thanks for peeking! To be honest, you are welcome to peek anytime.

There have always been vandals and hooligans destroying other people's property; looks like they were called road and castle builders in the olden days.

Half of Valley's End is built from stone out of the castle.
(Ah, so that's where the castle went)

What fascinating stories, although not more than the names themselves! I am often fixated with the etymology of names of places, particularly the ones with unusual names like this. Now what better than this beautiful post to continue with my quest.