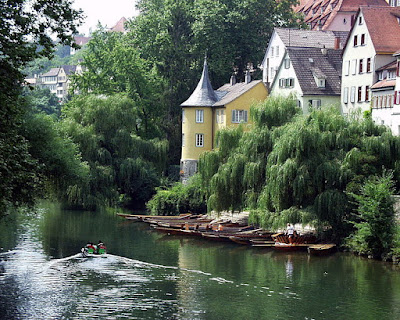 Friedrich Hölderlin (1770-1843), now considered one of the greatest German Romantic lyric poets, was little read and largely misunderstood in his lifetime. Even after his death it took at least another fifty years before his importance was recognised. One of the first people to acknowledge the genius of Hölderlin, and, indeed, to be influenced by him, was the poet Rainer Maria Rilke.

A cataclysmic event in Hölderlin's life was his love affair with Susette Gontard, the wife of Frankfurt banker Jakob Gontard, who employed the poet as a private tutor. Hölderlin was dismissed when the affair was discovered, but the couple continued to meet each other in secret, until Susette fatally contracted influenza in 1802. Already showing signs of mental illness, Hölderlin never really recovered from Susette's death (she became the 'Diotima' of his poems), and his mental condition worsened.

After a fruitless stay in a clinic in Tübingen — where he was given three years to live — a local carpenter, Ernst Zimmer, took pity on Hölderlin, giving him a room in his house, a tower in the old city walls overlooking the river Neckar (see pic). Zimmer and his family were to look after him for the next thirty-six years until his death in 1843. During this time Hölderlin's own family and friends (who included the philosophers Hegel and Schelling) completely deserted him. The only mourners at his funeral were the Zimmer family themselves.


Another day. I follow another path,
Enter the leafing woodland, visit the spring
Or the rocks where the roses bloom
Or search from a look-out, but nowhere
Love are you to be seen in the light of day
And down the wind go the words of our once so
Beneficent conversation...

Your beloved face has gone beyond my sight,
The music of your life is dying away
Beyond my hearing and all the songs
That worked a miracle of peace once on

My heart, where are they now? It was long ago,
So long and the youth I was has aged nor is
Even the earth that smiled at me then
The same. Farewell. Live with that word always.

For the soul goes from me to return to you
Day after day and my eyes shed tears that they
Cannot look over to where you are
And see you clearly ever again.


(Image from Wikimedia Commons)
Posted by The Solitary Walker at 13:12

Man, towers and love. Guys heart was broken in two. Then he goes crazy.Another Day was the blues at it best. Robert Plante on vocals. Jimmy Page, slide guitar. Turn it up. Great post!

Wonderful post, putting together the photograph, the bit of biography, and then, of course, the poem.

Thanks for this Robert, bringing back a very vivid memory of working very late at night with street homeless people in central London and an elderly man quoting poem after poem of Holderlin and Heine in German as a leaving present when he found out I was changing job.

Sad story but a beautiful extract and picture.

Incredibly beautiful and sad all in one. Then reading the comments, the one from Andy, cranks it up yet another notch! Thanks. I think!

I thought I sent comments yesterday, Robert, but I now suspect that a transmission error sent them into the void. In any event, I really enjoyed this rich story about Holderlin. I know little of his poetry, but I really enjoyed the poem you quoted in the post. And, needless to say, I would give a king's ransom to live in that magnificent tower.

As George said it's really a magnificent tower, yes! But for Hölderlin's heart it was not enough to recovered from the death of Susette. Well a beautiful poem, in which he could explain clearly his profound sadness. Thanks SW, for sharing this post! Mick

Thanks for all your comments!

I was not familiar with Hölderlin before now, thank you. Such melancholy. To live farewell, wow.

Thank you for this piece. I became interested in Holderlin many years ago and then spent almost ten years researching his life and art and writing about it. My essay is posted at: http://www.neallcalvert.blogspot.ca/

An excellent essay, Neall – your research, knowledge and evident passion for Hölderlin's work is impressive.

I was fortunate enough to have been 'taught' Hölderlin at university by the poet, academic, translator and Hölderlin scholar, David Constantine (who's referenced in your end notes). Constantine's lectures and seminars (on Hölderlin and also on English and German Romantic poetry in general, on Kleist, on Büchner and on Brecht) became some of the most important influences in my life.